You can take your love of gaming to next level with the Dygma Raise Advanced Gaming Keyboard. This ergonomic keyboard is ideal for esports and offers you total comfort and control. The Dygma Raise actually detaches in the center so you can angle the keys as you need.

Normal Keyboards and mouse weren’t originally designed with PC gaming in mind, and despite the fact that gaming-focused keyboards and mice are widely available these days, many of them still sufferfrom the same drawbacks and shortcomings that their non-gaming counterparts do. So Luis Sevilla created a solution. The Dygma Raise, as it’s called, was designed from the ground up with professional gamers in mind. 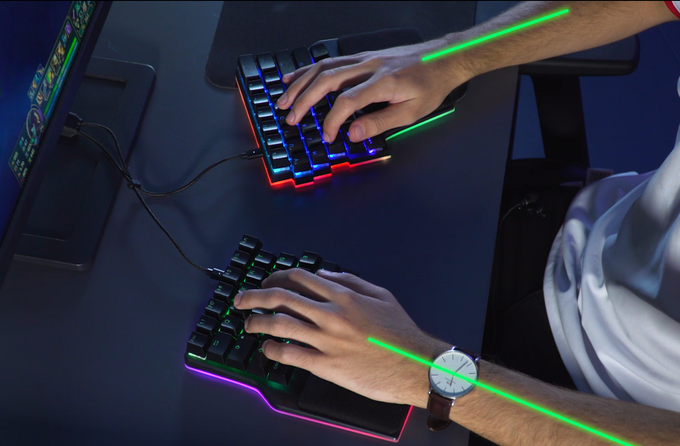 The important thing here is, it addresses ergonomics. “A normal keyboard forces the wrists to bend towards the pinky side of our hand,” Sevilla says on his Kickstarter campaign page. “Rotating Raise’s halves lets you keep your wrists at a neutral angle, decreasing pressure and strain over time. You can also adjust the width between the [keyboard’s] two halves, placing them in front of your shoulders to reduce internal shoulder rotation.
This gaming keyboard is awesome not only because of its split design but also for the configuration software allows you to create different layouts and toggle instantly between them. Every key in every layout is re-mapable and can be configured as a macro.

Any key can have special behaviours if you tap once, several times or hold it. For example, you could configure the Shift key so it behaves this way:
Its software and firmware is open source. Which means anyone can make an improvement or program their own plugins and the whole community can benefit from it.