Docker is open source software for creating and managing containers. A container is different from Virtual Machine, while virtualization involves running many operating systems on a single system, the containers share the same operating system kernel and isolate the application processes from the rest of the system. which means it does not have an entire OS, only what is needed to run its applications(code, runtime, system tools, library, and settings).A docker container is built from an image, which corresponds to its configuration.

When users talk about Docker, it’s usually the open-source client-server application that forms the basis of the container platform. In Docker terminology, this is commonly referred to as the “Docker Engine”. The Docker engine is based on the Docker daemon , a REST API, and a Command Line Interface (CLI) for the user interface. This build allows you to deal with the engine through the command line and easily manage images, Docker files and containers from the terminal

Docker Client – Docker client key component which used by many Docker users to interact with Docker. When you run the docker commands, the client sends these commands to dockerd.

Docker Registry – The place where Docker images are stored. 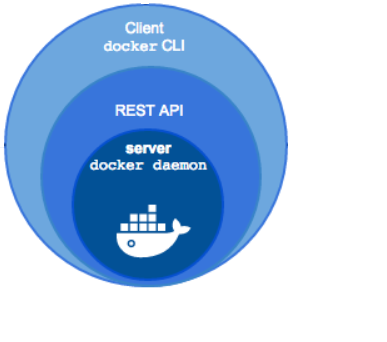 Containers:
A Docker container, unlike traditional virtual machines, does not require a separate operating system. Instead, it relies on the kernel features of the underlying operating system and uses resource isolation (CPU, memory, I / O, network connections, and so on).

Images:
Images are created from configuration files, called “Dockerfiles”, that describe exactly what needs to be installed on the system.A Docker image represents the file system, without the processes. It contains everything you have decided to install (Java, a database, a script that you will launch, etc …). A container is the execution of an image.

Dockerfiles:
The Dockerfile is your source file that once compiled gives an image. A Dockerfile can be included in other Dockerfile, and be the basis of several different images. You can choose to use official images, modified images that you find on Docker Hub, or customize your own images by writing a Dockerfile.

Volumes:
Volumes are the most suitable mechanism for persisting data generated by and used by Docker containers. Docker volumes have many advantages, such as easy backup or migration, or easy management with Docker tools and commands.

Docker Swarm:
During production, two major constraints can emerge, scalability and availability of containers to ensure high availability. This aspect leads to a multiplication of containers and Docker hosts. It becomes difficult to manage all these elements in a simple way via the Docker client. This is where Docker Swarm comes in, which will simply orchestrate all operations.

Interactions with the Docker registry